The Hungarian recycling company Mü-Gu Kft. celebrated its 30th anniversary at the beginning of October. During one of the regular visits to Amstetten, former Managing Director József Máthé and his successor Nándor Hoffmann reported on the beginnings of the company, revisited the history, talked about the current challenges and provided a little insight into the festivities on the occasion of the 30th anniversary.

How it all began

In 2022, the Hungarian company Mü-Gu Kft. can look back on quite an eventful history. József Máthé is one of those who has been in the thick of things from the very beginning and not just part of it, and he tells us about the founding period: „Herbert Müller-Guttenbrunn traveled to Hungary as early as the 1980s to purchase material for his operations in the Mostviertel region. At the beginning of 1990, we met by chance and started talking. At that time, Herbert said he was looking for a technician.“

At that time, Máthé was working as a technical draftsman and his technical know-how made him the ideal man for the owner family. Without further ado, Máthé decided to come along to Austria for a week to get to know the company. However, Máthé found the already planned expansion to Hungary so exciting that, despite a heavy heart, he parted with his Hungarian family and stayed in Austria for a whole year to prepare the planned set-up of the new company. His expertise as a technical draftsman was in demand because, in addition to the search for a suitable site, the first step involved planning the entire plant infrastructure. In 1992, the factory site was put into operation and József Máthé was appointed Managing Director of Mü-Gu Kft.

„Our acquired company site was a former slag heap, accordingly there was no infrastructure. We built a rail connection, an office building with a spacious break room for the employees and got an old shear from the then Schrott Mü-Gu GmbH, which formed a good basis. From another company we bought an old mill, but unfortunately it burned down in 1994. Against the background of the opening of the East, this period was not easy for the young company.“ In addition, there were major challenges in purchasing materials. Hungarian collection systems were not well structured in the early 1990s, so Mü-Gu Kft. had to process material streams that contained little valuable raw material. Economically, this was not always easy – in addition, there was an active black market, which made legally correct material procurement difficult. Although Mü-Gu Kft. had a shredder in operation as early as 1998, success was a long time coming. Incidentally, to date there are only three shredders in Hungary – one of which is still operated by Müller-Guttenbrunn. 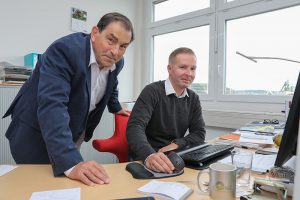 In addition to the major economic challenges, personal fates also moved the company’s history, as Máthé reports: „The tip of the iceberg was my heart attack in 2003. Thankfully, I received generous support from the parent company and was given a stay for medical treatment at an Austrian rehabilitation center. For the sake of my health, I had to draw a line, cut back and vacated my office. Until 2011, I supported the team of the trading division, after which I became a consultant mainly in the area of investments and expansions.“ However, all challenges were well mastered over time, allowing the company to develop positively, both economically and in terms of personnel. While there were around 50 employees in the early years, the current managing director Nándor Hoffmann has been able to increase the number of employees to 110 since 2013. However, Hungarian environmental regulations have also become stricter, which has resulted in the quality of the input material increasing over time and the company also improving economically. MGG Mü-Gu Kft. is now a modern industrial company specializing in the processing of iron and metal waste. A 1,250 HP shredder, a hydraulic shear and other devices for separating ferrous and non-ferrous metals can be found on the approximately 40,000m2 area. 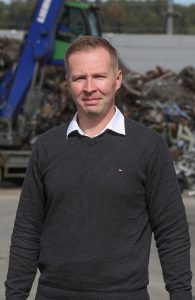 Nándor Hoffmann was appointed Managing Director of the company in 2012, which meant a quite challenging takeover for him: „Mü-Gu Kft. was already very well known in our region, so the bar was quite high for me as the new Managing Director. I admit that it wasn’t easy at first, because there is no evening class or course of study in which you can learn in the shortest possible time what the tasks of a good managing director are, not to mention the fact that I wasn’t given a recipe for success on how to become even more successful. So I had to teach myself this business and, along the way, review many contracts and integrate a future-oriented structure into the company. The first three years, during which we reorganized ourselves as a company, were a real nightmare for me. But the many sleepless nights were fortunately worth it in the end.“

In the meantime, Nándor Hoffmann has the company excellently under control and it is standing on stable legs. Nevertheless, Mü-Gu Kft. is also confronted with current challenges. „Electricity prices are shooting through the roof for us as well right now; we are currently paying 13 times as much for energy supply as we were a year ago. In addition, the waste management system in Hungary will change a lot next year, as recycling licenses have been awarded to a large company. However, we at Mü-Gu Kft. know one thing: global uncertainties have never thrown us off course, as we have always been able to react quickly and well up to now,“ Hoffmann emphasizes. 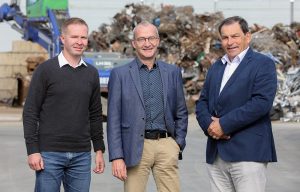 Regular visits and intensive discussions are important to Nándor Hoffman (left), Christian Müller-Guttenbrunn (center) and József Máthé (right). In this way, the Hungarian company can benefit from its sister companies in Austria in terms of know-how.

In spite of everything, the managing director sets the goals for the next few years very high in the usual MGG manner: „We want to acquire more machines. Of course, increasing the recycling depth is always our top priority. Through the good and close cooperation with the other MGG branches, we naturally also benefit in the areas of technology and innovation.“ 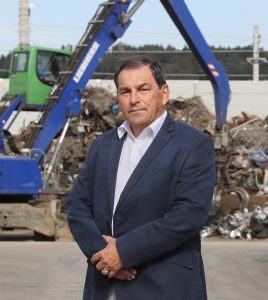 József Máthé enjoys the last months before his retirement as a consultant at Mü-Gu Kft.

Since his official retirement, József Máthé has been working as a consultant for Mü-Gu Kft. and is thus retired only on paper, so to speak. In September 2022, he already celebrated his 75th birthday, but his age does not show, because the former managing director is still bubbling over with ideas and visions for „his“ company. But at the end of 2022, the time has actually come and Máthé will also retire as a consultant.

When asked what he will do with his future free time, he goes into silence for a moment and then reveals: „Since I never had a hobby, or rather Mü-Gu Kft. was my only passion, I will try to make Budapest’s museums palatable to me. So far I have only seen two of the many galleries and exhibitions. It would be a nice goal to visit all the museums of the Hungarian capital. I’ll always keep my cell phone close at hand, though, so maybe the Mü-Gu Kft. team needs some advice from me.“

When asked for a concluding statement, the man who shaped and played a major role in developing Mü-Gu Kft. says, „Herbert Müller-Guttenbrunn’s trust has always touched me deeply. The time at MGG has made me very happy and I say it like it is, I love my job! Fortunately, I still have a few months left, because officially I won’t be leaving the company until the end of 2022. My colleagues won’t be getting rid of me so quickly, though, because I’m sure I’ll be dropping in for a coffee a few more times. I wish Nándor Hoffmann a lot of strength, energy and strong nerves, because he will need them to successfully master the current difficulties, such as the new waste system or inflation. I am firmly convinced that he will master these challenges and make the right decisions.“ 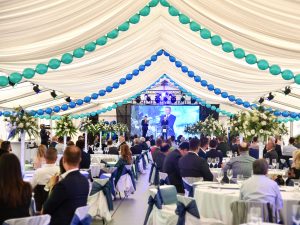 The 30th anniversary of Mü-Gu Kft. was celebrated with 200 guests.

Away from the personnel changes, the festivities on the occasion of the company’s 30th anniversary were on the agenda at the beginning of October. „We celebrated our 30th birthday in a big tent with a stage and an extensive supporting program. A total of 200 guests from Austria, the Czech Republic and Romania came to this festive event – including some customers, suppliers and business partners as well as our mayor,“ reports Managing Director Hofmann. During the speeches, the successes of the past years as well as the investments were highlighted. All speakers emphasized that the name „Mü-Gu Kft.“ stands for qualitative recycling in Hungary and that the work is appreciated by the population. „If I can make a wish for our company’s birthday, it is that the next 30 years will be as wonderful as the past five have been,“ Hoffmann hopes.

A decade of MGG Remat Arad

By the way: Mü-Gu Kft. is not the only company in the Müller-Guttenbrunn Group to celebrate a milestone birthday in 2022. The S.C. Remat M.G. plant located in Romania, which was acquired in 2005, has now been renamed MGG Recyling as of December 1, 2022. MGG Recycling is one of the largest operators of recycling plants in Romania. In addition to its own three recycling plants, the company manages a large number of collection points throughout Romania. Its main activities are the collection, treatment and trading of scrap metals, non-ferrous metals and paper.

10 years ago, with the opening of the recycling park in Frumuseni (near Arad), considerable processing capacities were created for the recycling of cable, electrical and electronic scrap. As a result, MGG Recycling became one of the largest recyclers of electronic waste. MGG Recycling not only ensures the proper recycling of end-of-life vehicles, electrical and electronic scrap, ferrous and non-ferrous metals, but also makes a great contribution to the relief of the environment in Romania with the collection and recycling of paper and plastics.

On this way we wish both companies a happy birthday and continued success.