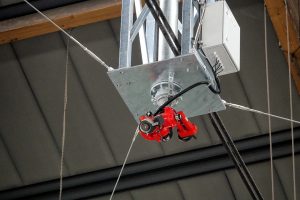 At the MGG Metrec plant in Amstetten, a new automatic extinguishing system was successfully tested. This system is mainly used for combatting the fire hazard posed by lithium-ion batteries in old electronic equipment.

The fact that mobile phones and other electrical devices suddenly start to burn is something you hear and read over and over again. The reason for this is often the lithium-ion rechargeable batteries used, which begin to burn quickly when mechanically damaged. It may even be enough for the electronic device to simply fall to the ground.

Accumulators and batteries are and should therefore be removed when these devices are collected in the waste yards. Despite all the precautions taken, such a battery can accidentally be overlooked and become a potential cause of fire in recycled materials. The Müller-Guttenbrunn Group (MGG), which processes thousands of tons of electrical and electronic scrap every year, is also aware of this. As early as 2014, a fire alarm system was therefore installed in the shredder hall for electronic scrap at the MGG Metrec plant in Amstetten.

This system was now supplemented with an automatic extinguishing system. “Now we have a fire engine hanging from the roof of the hall,” smiles MGG Metrec managing director Michael Grimm. “The new system automatically detects when a fire should break out in the hall and combats it immediately with a water-foam mixture”. This enables the fire brigade to contain or even extinguish the fire during the time it takes to move in with the first extinguishing vehicle after the fire alarm. 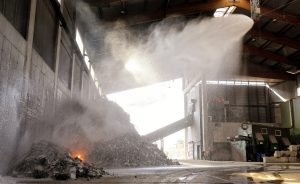 The new extinguishing robot has a water reservoir for half an hour of operation. Since the water in the shredder hall would freeze in winter at icy temperatures, the pool is heated so that it is always ready for use at this time of year. Müller-Guttenbrunn invested a total of 175,000 euros in the new system, which was successfully tested for the first time at the beginning of April. Michael Grimm is pleased that the burning old electrical appliances were extinguished within seconds: “It worked really well. Now we can all sleep a little more calmly.”

Armin Blutsch, commander of the volunteer fire brigade Amstetten and member of the Müller-Guttenbrunn Group, supervised the test of the new extinguishing system together with his fire brigade colleagues. He explains the danger posed by lithium-ion batteries: “The energy density in the small batteries is very high. Often the protection against damage is very low due to the construction of the housing. If, despite all precautionary measures, such an energy source finds itself in the recycling material to be processed, such a battery can quickly be destroyed by the use of large machines. After all, the material is transported by trucks, loaded or unloaded and processed with large machines. Such a battery is quickly destroyed, resulting in a short circuit and overheating.”

The fire brigade commander also points out that the battery itself cannot be extinguished, but is completely burnt after a short time. “It is important that the environment – in the case of electrical appliances the plastic – does not start to burn,” says Blutsch. Nowadays, lithium-ion batteries can be found in many devices – from mobile phones to e-bikes, from notebooks to digital cameras. However, the batteries are often installed in such a way that they cannot easily be removed by the user. Therefore Armin Blutsch sees a backlog demand in the device construction: “The manufacturers are asked to ensure that the batteries can be removed without special tools and without special knowledge. Then, like other batteries, it would be relatively easy to collect them separately from old devices. The danger of a battery being overlooked at the waste yard would be greatly reduced.”