„A green sticker for old cars!“

Editor:   This is the first MGG newsletter. Why is this initiative launched?

CMG:  We want to enhance communication with our partners, suppliers and customers. We live in a communication society in which it is challenging to filter out important content for himself. What is important to me? What really interests me? And that’s why we decided to start offering compressed industry information to our business partners approximately four times a year.  And in addition, we will publish a printed magazine as well, because we believe that there are still many people who prefer to have a „paper at hand“ as a more simple and sympathetic medium than just electronic information.

Editor: Then we go straight in medias res and talk about the current situation of waste management. What are the current challenges facing the industry?

CMG: Not that much has changed over the last few months. The biggest challenge is still that we lose a lot of shredder raw material, be it old cars or electronics scrap.  Much of this material is disappearing as illegal exports. There are just too many illegal collectors and dealers,  black sheep who disappear across the border with the material that we should work with to recover valuable resources. Take the example that in Austria on average around 250,000 cars a year are deregistered and taken out of circulation.  The domestic shredder plants treat less than 70,000 cars in total. The rest of the cars simply disappear and this quantity of cars is of course the missing volume in our production quantities. And it is similar with the electronic waste.  Over and again you can see photos, films and newspaper reports that show containers at ports with valuable recyclables, that shouldn’t be exported.

Editor: And what can you do about it?

CMG:  Unfortunately we cannot prevent it.  Admittedly it is a really difficult task to control this.  By the end of the day it will be difficult to dictate to anyone what he ultimately does with his car, which he bought expensive 10 years ago.  The question is where do you draw the line:  When is a car scrap metal?  And which cars can further be used in another country?  Roadworthy cars can of course be moved across the border, but scrap cannot.  There are clear rules for cars, if a repair is more expensive than the actual value, the vehicle may not be exported. That sounds pretty simple and clear.  The crucial question is how this simple rule can be executed?  Just think of the policeman who stops one of these ominous light commercial vehicles with a trailer loaded with a vehicle on Saturday night.  The official may find it impossible to identify if the loaded car is scrap or whether it still is roadworthy – nor is he qualified to do so.  Every time the advice of an expert would be needed to determine whether the old car can be exported or not.  I can fully understand that the police officer can be seriously frustrated by this.

Editor: Are there any solutions for this? 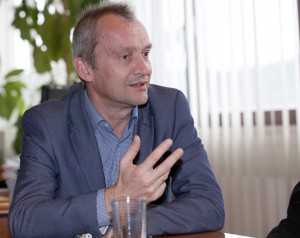 CMG:  It is a complex story.  Tons of legal texts have already been written and in fact these laws and legal texts actually are logical and clear; it is the execution in practice that is failing.  And that is where the question arises what can be done to solve this.  In Austria of course talks are taking place to try and fix these problems from a practical point of view.  Discussions are taking place with ministries, there is a working group „Stop illegal waste exports”, which working group is split into sections covering automobiles and electronic waste. And of course Müller-Guttenbrunn is involved in these discussions.  But it continues to be a complex matter.

Editor:  Even more so because this topic is indeed an EU-wide issue. In principle, we have the free movement of goods, but clearly this is not the case for waste?

CMG:  Free movement of goods is not naturally given in the waste sector, and not without reason, because unfortunately some unpleasant histories have taken place in our industry.  Therefore, I advocate some sort of „seal of approval“. In reality, we would need two car-stickers. A white sticker, which approves that the car is still roadworthy – as is the case now- and, for example, a green sticker for deregistered cars to prove that the repair cost to bring the car back into traffic, is cheaper than the current value of the vehicle. This could be introduced as part of the normal checks if a car is taken out of the traffic.

Editor: And that would largely facilitate the work of the executives…

CMG:  The policeman would at any control just need to look at the sticker: if the car has a white sticker, it is roadworthy.  If it has the green sticker, it needs repair, but the vehicle is still so valuable that you can repair it. And if the vehicle has no valid sticker, it is waste and it must be so disposed of properly and may not be transported across the border anymore.

Editor: Who should pay this green sticker? The car owner?

CMG:  Finally, these costs would indeed be for the owner of the vehicle.  This would also be in his interest, because he would thus be able to sell the vehicle at a higher price.

Editor:  Could this idea be considered as an EU wide solution?

CMG:  Of course can this be discussed on a European scale.  The Germans and the French have in fact the same problems as we have.  Also there, end-of-life vehicles disappear across borders.  I am sure that the interests are the same everywhere in Europe.  In is almost in every European country the return rate of end-of-life vehicles to local car shredders is only some 30 percent of the total number of de-registrations.  The only difference is that the Spanish waste is going to Africa and not to Bulgaria.  The problem is the same all over Europe.

So a recycling sticker would be a good idea … even better course would of course be a system of incentives….