Many small and big improvements can be found in the new delivery and processing hall for E-Waste Shredder-Residues at MGG Metran. As always in the Müller-Guttenbrunn Group, great importance is attached to environmental protection in the construction of the new building.

What works well can be improved, again and again. The largest processor of materials from wastes of electronic and electrical appliances (WEEE) in Austria, the Müller-Guttenbrunn Group proves this time and again. The latest step forward was taken at the MGG Metran plant in Kematen. 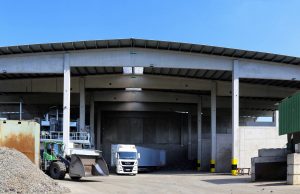 MGG Metran had already reached the limits of their capacity. For this reason, a new 2,500 m² storage and processing hall for Shredder Residues from WEEE was built last year. Within six months, the construction of the company’s new building, internally referred to as “Bunker 5”, and the installation of all associated facilities as well as technical equipment were completed.

As a result, MGG Metran now has a modern delivery centre for E-Waste Shredder Residues. Around 2,500 tons of material are currently processed in the new hall each and every month. The high flying roof construction makes it much easier for tipping truck to dump their cargo. 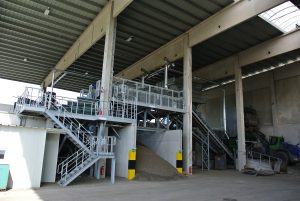 There are numerous other improvements in “Bunker 5”. For example, a new “EVA 2” E-Waste Shredder Residues pre-treatment plant was installed to process this complex material more efficiently. It separates “bulky” recyclables that would otherwise impair the subsequent recycling process. The increase in efficiency is enormous, as up to 10 percent of coarse e-waste can be recovered “in this ingenious way”. On a closer look, further clever optimizations were identified at all corners and ends. One example: The sensor-controlled conveyor belt ejector autonomously searches for free storage capacities for pre-sorted material.

Environmental protection continues to be a top priority

In addition to many small details, Metran Managing Director Gunther Panowitz and his team also kept an eye on the big picture. For this reason, great importance was attached to environmental protection when the new plant was built. The integrated air filter system catches about 99.999 percent of all particles in the air. The new plant thus over complies with all legal requirements by far. 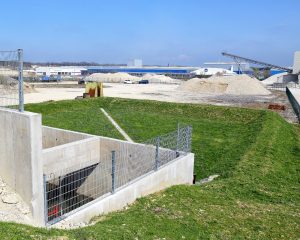 The treatment concept for surface and roof water was also adapted for the construction of “Bunker 5”. The rainwater from the area around the new hall is cleaned, stored and reused as process water in the recycling processes at MGG Metran. Circulation is also the order of the day here. Best of all, everything happens naturally. Before excess quantities are released back into the environment, e.g. after a downpour or plant shutdown, a specially selected layer structure of the soil ensures a bio-filter effect on the corresponding infiltration surfaces. And in addition, 500 m³ of purified water can be stored. Managing Director Gunther Panowitz explains: “With the infiltration areas, we are acquiring nature’s abilities in order to guarantee optimum water quality. For us as a recycling company, it goes without saying that we are at the cutting edge of technology in order to protect the environment. Furthermore, we do not need valuable drinking water for our processes, but first use these surface waters instead.”

A detail on the side:

Something can always break once and this is what has happened with the “EVA 1” Metran prototype plant. The prototype broke down and refused service in October 2017 with a serious technical defect. The timing could not have been better, as this coincided with completion of “Bunker 5” with the new electronic scrap pre-treatment plant. Thanks to this new infrastructure, MGG Metran was able to continue production seamlessly.

Modern recycling costs a lot:
In 2017/2018, MGG Metran will invest well over 4 million Euros in innovations in infrastructure, air and water technology as well as in new recycling technology. These investments are important for the development of a genuine Circular Economy, for the environment, for us as humans and above all for future generations.