In one of our last MGG Newsletters we took a close look at transport efficiency in the non-ferrous metal recycling facility of Metran in Kematen. But not only high-tech wheel loaders, electric forklift trucks and the rail connection help preserve the environment, at Metran an attempt to operate efficiently for the benefit of the environment is undertaken in many areas.

Saving energy makes sense and benefits both the environment and the wallet. The Müller-Guttenbrunn Group has been aware of this for a long time – with the metal recycling Metran in Kematen as well. Existing structures are closely and systematically examined over again there in order to optimise them by means of new technologies. This applies to the production area – but also to the administrative area, as the office building demonstrates.

The original Metran office building was built in the mid-1980s. Thus it could no longer be compared with energy-efficient new buildings of modern times. For this reason, it was decided to not only expand the office, but to design it more efficiently. The old Styrofoam rock paneling was removed and replaced with a ventilated metal facade that is insulated with rock wool. On the roof, we use the sun’s energy with a large solar system. Thus the water that is used for cleaning and showering of the entire workforce is heated in a CO2-neutral way by the sun. The 4000 l heat storage tank covers the hot water supply of a few days in just a few hours of sunshine. By means of modern heat pumps, a total of 600 m² office and social rooms are heated, or cooled on hot days. “A heat pump is a very energy efficient process, since a kilowatt of electricity provides four kilowatts of heat output. So we get along with only 15 kW power for the entire building and save at least 8,000 liters of heating oil per year,” explains Metran Managing Director Gunther Panowitz.

This efficiency can ultimately also be measured in figures. Thus, for example, it can be determined how many kilowatt hours of energy are needed for one ton of recycled material. This allows comparisons between different companies, different processes and different technologies. As the people at Metran are convinced that energy efficiency also means cost efficiency, they try to carefully deal with energy in all processes. One such example is the sink-float system – known among insiders also as “heavy media separation”. With a special liquid (= finely ground iron powder + water) and at high throughputs, it separates up to 40 t/h into different density metals and other lighter substances. With a consumption of 5 kWh per ton of electrical energy – for pure-grade material –, you can see the energy efficiency in the numbers as well. All of this without significant use of consumables and auxiliary materials.

Sometimes even just small steps make for a big leap in efficiency. Thus in the sink-float system – just like in some other systems – the large motors are equipped with frequency converters. These allow for optimising the current frequency at lower capacity utilisation. If one adds up the savings of all motors together over a significant period, it means a significantly reduced use of electrical energy and also considerably less wear and tear on the facilities thanks to adapted, reduced speeds. 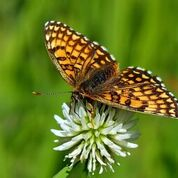 Sometimes the optimisation also goes far beyond efficiency and cost savings. This applies, for example, to the conversion of the lighting at the Metran grounds. Surface LEDs are now used as illuminants and we environmentalists are delighted with it, since our Metran facility borders on a Natura 2000 area along the Ybbs that is considered a special habitat of butterflies. “Luminous 2,500-watt halogen floodlights are dangerous for animals at night. They are attracted by the light and then die on the hot spotlights. This does not happen with the ‘cold’ LED lights”, Gunther Panowitz elaborates concerning the difference, and adds: “We do this everywhere. We take a careful look at every nook and cranny of our operation. The key here is to open the eyes, to see which technologies exist in this world and how we can use these efficiently and appropriately in our operation. And that simply applies to the lighting as well.”