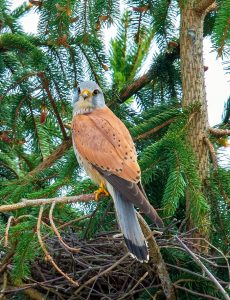 In order to solve an ever increasing problem, attempts were made to settle peregrines at the MGG Metran area – with success. Only a few weeks ago, offspring hatched again.

In many cities they have become a plague: the pigeons. In some places they are already considered pests! It is not for nothing that they have even been given the unflattering nickname “Rats of the air”. But even outside the large conurbations, the street pigeon finds a good livelihood with sufficient food. Over the years, for example, more and more pigeons have made their home on the MGG Metran site – and this has led to problems.

No joy with the pigeons

“With their excrement, the animals use to glue together cable cups, wires and other electrical supply lines,” says Gunther Panowitz, Managing Director of MGG Metran. In addition, the pigeons – like many other bird species – find food in the recycled waste. Cans with leftover food or pet food that are not completely empty are a real find. This would not be too bad in principle, but the birds do like to hijack the whole can. So it was not rare to see the animals on the surrounding flat roofs eating their prey with relish. This was doubly annoying, because good recycling material was lost in this way, which then repeatedly clogged the gutters!

Hunters instead of poison 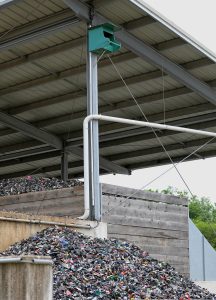 For this reason, MGG Metran was forced to stop the unbridled reproduction of pigeons. However, poison or similar means were out of the question. After all, as a recycling company, ecological considerations are paramount. Instead, the idea was developed to locate birds of prey on the company premises. For this reason, large nesting boxes were built, which are ideally suited to animals such as the peregrine falcon.

With great hope, MGG Metran employees fixed the nesting boxes under the roofs. After that, they had to wait. The first year they waited in vain, but the second year peregrine falcons actually nested. As a skilled hunter, it almost exclusively captures flying birds. He spies his prey either from an elevated sitting post or in a high circle flight. Pigeons are right at the top of the menu – ideal from the point of view of the MGG Metran team. The number of pigeons could be reduced in the meantime. 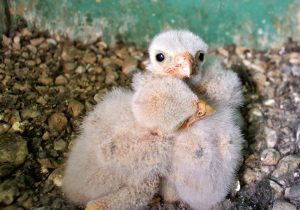 In the meantime, the falcons at the MGG Metran site feel so at home that they even brood in the nesting boxes and raise young. Only a few weeks ago, small peregrine falcons hatched again from the brooded eggs. “The falcons have finally arrived at our home. We are always amazed when we can watch these majestic hunters during their flights,” says Gunther Panowitz, pleased that the ecological pigeon defence works so well.