Far beyond the borders

In Romania, where the roots of the Family Müller-Guttenbrunn lie, the Müller-Guttenbrunn Group operates two key sites: in Fumuseni near Arad, only 17 kilometers from the Hungarian border in the west part of the country and in Braşov in the center of the country. From the location in Fumuseni also two other production sites are managed, namely in Timisoara and Arad. All in all around 520 employees work for the MGG companies in Romania.

As in Austria, MGG is establishing competence centers in each of the individual operational sites. „In the year 2012 we established a green field site as additional operational plant in Frumuşeni. This site was established as competence center for E-Waste and the recycling of cables and with the opening of this site the recycling processing capacity for WEEE and cables increased enormously.“ said CFO Michael Kimmeswenger. Apart from his function as CFO, he is also director for Central and Eastern Europe within MGG and as such he forms the interface between the owner family and the individual operating companies in Central and Eastern Europe. In particular he forms the bridge head in the coordination between the various parties within the group: „Before any technical investments take place, for example, it is of key importance to establish the contacts between the technical departments abroad and the engineers in Austria, to make sure that we make use of the technical experience and know-how that the group disposes of. An exchange of experience, as we know so well, often leads to other innovations.“

Full services are in demand

This is also true for all of the MGG sites, so also in Mü-Gu Kft in Budapest (65 employees) and the Metfer Pilsen site in the (21 employees).

In the early years these subsidiaries served mainly as material supplier for MGG operations in Austria. Today most of these materials are processed locally.

Michael Kimmeswenger added that nevertheless a substantial proportion of the copper material produced in the MGG operations in Central and Eastern Europe are sold through the Austrian commercial activities, as this economy of scale simply makes commercial sense.

The local operations have to respond to constantly changing market conditions. In the early days the sourcing of material in Romania mainly consisted of demolition waste from abandoned factories or other old buildings. Today we source wastes from industrial and commercial enterprises. CEE Director Michael Kimmeswenger: „Today many suppliers want a full service package for their entire waste flow – including metals, parts, paper, industrial waste, etc.. This, of course, presents our sourcing and production teams with special challenges. „

Trust as an important prerequisite

In addition to the steady and often rapid changes, it is also important to be aware of the different cultures and mentalities. „People in these countries have often been disappointed – also by Western Europeans who wanted to make the quick buck. Therefore, it takes time and effort to win the trust of colleagues, customers and other stakeholders or business Partners.“ reports Michael Kimmeswenger reports from own experience. In the communication with the subsidiaries, no stone remains unturned to provide exactly this trust. In all of the MGG CEE subsidiaries Müller-Guttenbrunn standards are being implemented – that means that the group is paying attention to social standards, safety precautions at the workplaces and of course to environmental standards, many of which go far beyond the national legal frameworks.  Nevertheless, it is often difficult to find enough skilled workers in these countries, as the young, well-educated people often move abroad.

Another major challenge is the regulated flow of information within the group. In order to improve on particularly this aspect, a group-wide uniform accounting software (both for financial and asset accounting) was recently implemented. The special feature of this package:  uniform data for the responsible managers within the Group and reporting adapted to the local, regional or national requirements in each country. 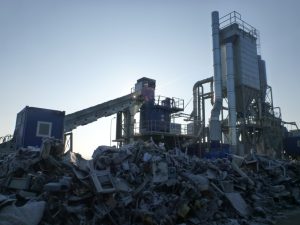 The Müller-Guttenbrunn Group is undertaking many new initiatives, tasks and projects in the various countries. In Romania the local management team was successful in signing a long-term major contract for the recycling of E-Waste. Therefore the operation in Frumuşeni was extended accordingly. In Hungary, the team is currently working on the expansion of the non-ferrous metal treatment with improved processing equipment. Furthermore the fleet is in the process of being modernized. The successful Hungarian example forms the basis for improvements in the Czech operation of Metfer, where the team is also starting to work on processing of non-ferrous metals. In the Metfer Pilsen operation a metal press has also been installed, to improve the logistics.

The Müller-Guttenbrunn plans to intensify and improve the activities in the MGG operations abroad in order to develop a leading role in the recycling markets in these countries.

That can only succeed together by working on common goals, affirmed CEE Director Michael Kimmeswenger. Finally, one wants to overcome borders in the future with Müller-Guttenbrunn.