Photovoltaics. Anyone who has sustainability and a circular economy anchored in their DNA – whether a private individual or a company – must rely on this technology in the 21st century! This is also the case with the Müller-Guttenbrunn Group. 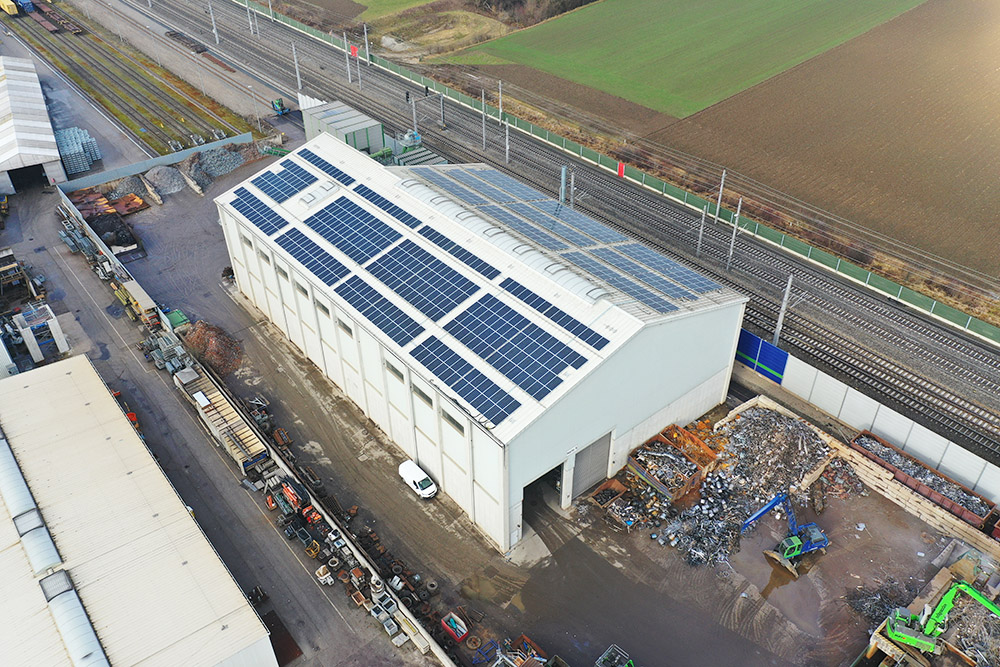 The latest installation at MGG Metrec produces electricity with a capacity of 250 kWp.

The Müller-Guttenbrunn Group has photovoltaic systems at all its Austrian locations. The latest PV system at MGG Metrec in Amstettner Industriestraße produces an additional 250 kWp (kilo-watt peak). At MGG Metran in Kematen, around 600 kWp are generated on four roof surfaces by over 2200 panels, and MGG Polymers provides 800 kWp of its own electricity. In total, the group in Mostviertel has PV systems with a capacity of around 1,650 kWp.

Metran Managing Director Gunther Panowitz sums up why MGG places so much emphasis on the expansion of photovoltaics: „PV is good for the environment. We can use existing roof surfaces and do not have to build anything new. We use most of the electricity generated in our own plants. Company vehicles such as electric forklifts or company cars get the energy they need from the sun and, last but not least, it simply makes economic sense! Photovoltaics simply pays off for us!“ 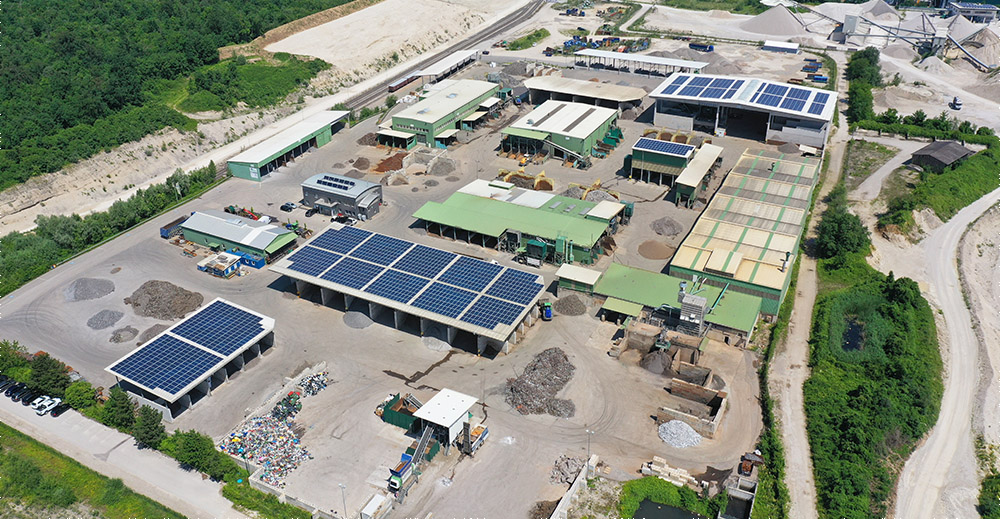 MGG Metran produces around 600 kWp of its own electricity on four roofs with 2200 panels.

Produced above the roof – consumed below the roof!

The majority of the electricity generated by the sun is therefore consumed directly in the factories. So to speak, the electricity is produced on the roof and immediately used in the hall below by the machines or for the light supply or for heating. In the summer months, up to 60% of Metran’s own electricity supply is covered in this way. Due to the operating hours from 5 a.m. to 11 p.m. on weekdays, the full potential of energy production is utilised and can thus be used directly. Up to 99% of the electricity produced is consumed immediately. Only at weekends or on public holidays is the surplus electricity fed back into the grid. 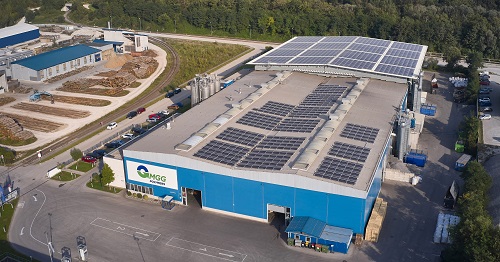 MGG Polymers produces around 800 kWp of its own electricity.

So how much is 1,650 kWp? „Our PV systems in Mostviertel could theoretically supply around 700 households with sustainable energy,“ reports Metran Managing Director Gunther Panowitz. However, in order to achieve this kilo-watt peak – i.e. the electricity peak – many factors have to interact. In addition to the necessary solar radiation, the right (steep) angle of incidence is crucial. In the summer months, almost 80% of Metran’s total electricity consumption is generated at peak times, putting it well on the way to CO2-neutral recycling. When it rains, clouds or in winter, the percentage drops accordingly, of course. Calculated over the year, MGG generates an average of about 20% of its annual electricity needs at its three locations with photovoltaics.

A major goal at Müller-Guttenbrunn is to become completely energy self-sufficient in the future. „Unfortunately, we are still very dependent on gas, so we as a society simply have to come up with something.

When asked where the journey can go and whether recycling can actually function in a CO2-neutral way in a few years, Panowitz has a clear answer: „Yes, it is possible, but two points are crucial for this. First, you have to be structurally fit, and we are. Our buildings used for PV systems so far and those to come in the future can bear the weight of PV panels and are favourably disposed to solar radiation. The second factor, however, is not in our hands, but in the further development of photovoltaic technology. 25 years ago, PV panels had an output of around 180 Wp (watt peak) per panel. Modern panels like the ones we have now installed at Metrec already manage 300 Wp. However, the upper limit is set by the sun, which radiates a maximum of 1,400 watts per square metre onto our earth. And who knows what else will be technically possible in the next few years. Perhaps we will manage – after appropriate further development – to exploit up to 1,350 watts per square metre one day.“

Hardly any alternatives to photovoltaics 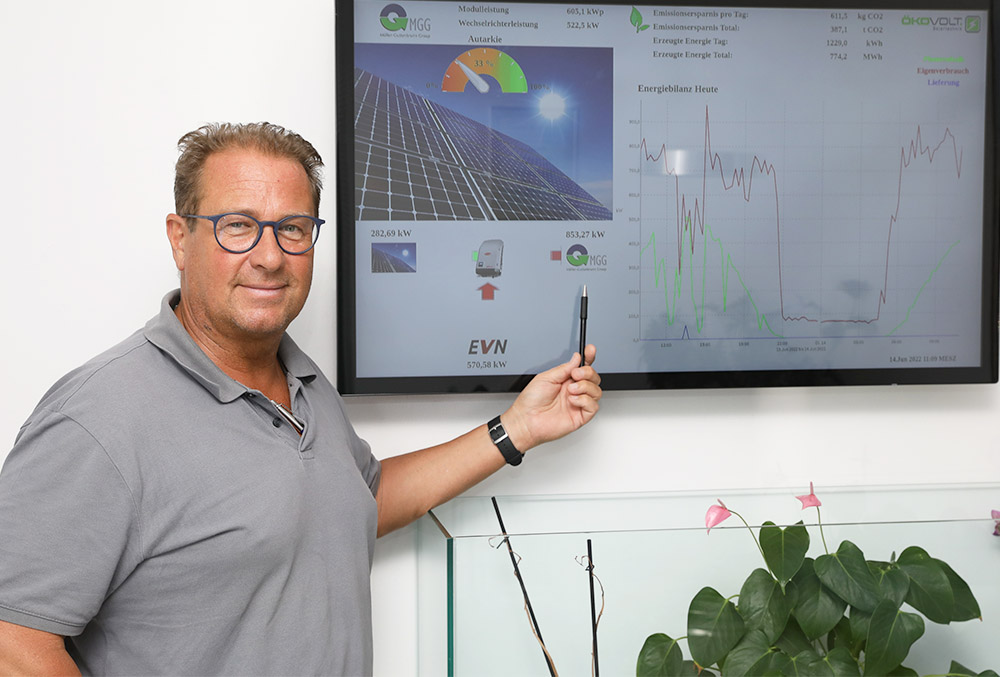 Are there sustainable alternatives to electricity production with the sun? Of course, wind and water are interesting possibilities as electricity producers, but they are associated with some hurdles, as Gunther Panowitz points out: „At Metran, we have thought about generating electricity with wind power. Unfortunately, this is not possible on our company premises. Wind turbines have to be a correspondingly prescribed distance from people or roads due to ice fall in winter, and this would have prevented the power plants from being located on the company premises. A list of complex requirements would also have had to be met.“ And these regulations are sometimes very specific, according to Metran’s managing director. „For example, we would have had to do a study that looked at the birds that might be killed by the rotor blades. It has been proven that domestic cats alone have 100,000 times more birds on their conscience than wind power in Austria.“ For Panowitz, hydropower would be an extremely sensible option for generating electricity. However, this is of course dependent on the geographical possibilities and society’s commitment to this form of electricity generation.

Truck e-mobility is a topic, but not yet quite suitable for everyday use.

When you talk about alternative power generation and sustainability, you also have to shed light on the aspect of e-mobility. That is why, at the beginning of June 2022, decision-makers from the Müller-Guttenbrunn Group found out about the current state of development of electric trucks at IFAT in Munich, the world’s leading trade fair for water, sewage, waste and raw materials management. „Around 20 manufacturers were represented with concrete concept vehicles. Currently, these vehicles have a range of about 250 kilometres. The big disadvantage is the batteries, which weigh six to eight tonnes per vehicle,“ reports Panowitz. However, due to the further development of battery technologies, ranges of around 500 kilometres will soon be realistic. If the issues of charging times and the e-filling station infrastructure are also solved, it is quite conceivable that electric trucks will also be used at MGG. Some of MGG’s wheel loaders, cranes and forklifts are already electrically powered.

For Panowitz, however, hydrogen-powered vehicles are also a possible future opportunity, „if the hydrogen is not produced by methane gas but by electrolysis from water. Realistically, however, that will still take a few years. Until then, we will continue to rely on rail as a central transport option. 65 tonnes, which is about as much as three full lorries, can fit in one wagon. The connections of the MGG companies to the rail network are top-notch, so we get thousands of truckloads off the road every year.“