During one interview Mag. Christian Müller-Guttenbrunn suggested a metaphoric solution to facilitate the enforcement of the existing legislation of the export of End-of-Life vehicles by introducing a green sticker. The introduction of this green sticker would allow an easier enforcement of the rule that a damaged or old car may not be exported when the value of the vehicle is lower than the costs of repair to make the car road worthy. This idea was picked up by the International Automotive Recycling Conference IARC, taking place in Berlin last month, for a discussion panel. 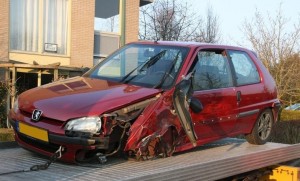 Indeed cars may only be exported, if these vehicles are in a sufficient technical roadworthiness; if the repair cost in the country of export is higher than the actual value of the car, the export of the vehicle is illegal, also illegal if thus vehicle is exported for dismantling in the country of destination. However, just looking at Austria, the amount of de-registered vehicles amounts to roughly 250.000 cars of which less than 50.000 end up in Austrian shredders. The recycling industry is thus losing out on huge amounts of raw materials. “It is wonderful that with great administrative efforts we can prove that 95 % of the end-of-life vehicles recycled in Austria are recovered, either as material that is recycled (85%) or as recovered energy (10%). However if that only refers to less 20 % of the de-registered cars, we only prove that only 19% of the materials of ELV’s are effectively recycled properly”, says Chris Slijkhuis, who took part in the panel discussion on behalf of the Müller-Guttenbrunn Group.

For this reason, new approaches are needed to improve the registration of end-of-life vehicles in Europe and particularly the management of the whereabouts of these de-registered ELV’s.

It was clear from the discussion at the IARC conference that the definition of “ELV” (End-of-Life Vehicle = waste that is not allowed to be exported) and “used car” (= product that can be exported) is crucial and that this definition has not become accepted in all of the Europe member states over the 15 years that the ELV Directive is in place, despite the many discussions about this topic. As a consequence large numbers of ELV’s continue to be illegally exported and it was clear from the discussions that the priority of enforcement agencies lies somewhere else. A representative of competent authority in Hamburg harbor referred to the more than 10.000 containers that leave the Hamburg harbor daily and that are being inspected by not more than 6 inspectors and he confirmed that their priority is not on ELV’s.

Mrs. Artemis Hatzi-Hull of the EU Commission recognized problems “with statistically missing ELVs and other problems with lacking of good quality data”. She is in touch with Europol and Interpol to get recognition by the enforcement agencies for these problems. 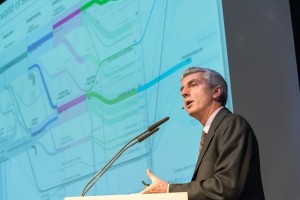 Prof. Allwood on behalf on University of Cambridge during his speech at IARC 2016.