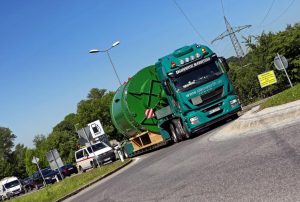 Müller-Guttenbrunn modernized the exhaust system of the shredder plant in Amstetten. For this purpose, roughly 15 tonnes weighing highly modern dry-air filters were installed.

In order to be able to recycle metallic wastes must first be shredded. This is especially true for old cars or complex pieces of metal containing wastes such as washing machines. For this purpose, the company Metall-Recycling Mü-Gu in Amstetten has been using a large shredder for over 30 years and this major piece of equipment is constantly being renewed and improved.

This year, the focus of the modernization process was on improving the exhaust air technology. After all, end-of-life vehicles contain dust and, the shredding process itself also produces smaller particles. Sophisticated exhaust air systems ensure that these small particles cannot escape into the environment. Although the shredder always adhered to all legal threshold limits, some of the systems of the shredder have to be renewed from time to time. Therefore the exhaust system has now been brought up to the latest state-of-the-art and thus sets new standards in air cleanliness for dust emissions.

In two installation steps – one at the beginning of the year and in May – the existing filters were replaced by the most modern systems. For the engineering team of Müller-Guttenbrunn, this meant two meticulously planned large-scale renewal operations. The plant was shut down twice and the existing de-dusting plant was replaced by a high-performance system according to the latest filter technologies. As raw material continued to come in, the planning process and the timing of the installation was very critical.

„As a recycling company, it is important to always work as environmentally friendly as possible. It is therefore a great importance to us to at the latest state-of-the-art in the field of air purification,“ says Christian Müller-Guttenbrunn, CEO of the Müller-Guttenbrunn Group, about this large-scale investment of around one million euros.

As before, the cleaning of the dust-laden air from the shredder takes place in two stages. First, the air is pre-cleaned in two cyclones (centrifugal separator). The coarser particles are separated from the air coming from the shredder process just in the same way as it is done in modern vacuum cleaners. Subsequently, a so-called fabric filter separates the finest particles from the exhaust air the shredder plant. A large amount of dust is thus filtered out of the air passing through the shredder and this dust material is subsequently delivered to a specialized waste incineration plant for thermal recovery (incineration whereby the generated energy is used for instance to produce electricity). In order to guarantee the functionality of the system, the existing measuring instruments are extended by a further detection system. 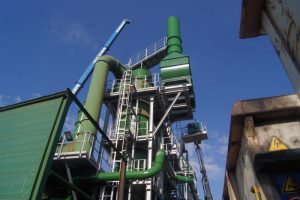 In addition, the interface between the two filter stages is extended by a large particle separator and a so-called pre-coating system. While the large particle separator is mainly used to eliminate larger particles such as pieces of residual film and tape, the precoating process also filters and binds the smallest parts from the air. The combination of these two air cleaning systems also increases the overall safety of the shredder system as a whole – hence the shredder system security is generally increased by the newly installed components as well.

This huge improvement in exhaust technology is a gain for all, says CEO Christian Müller-Guttenbrunn: „We are showing once again that we care about the ongoing development of our systems. The consideration of the environment and of course our neighbours is as important as increasing the efficiency of our recycling systems. “