From 19 to 26 October 2022, „K“, the leading international trade fair for the plastics and rubber industry, took place for the 70th time. In the middle of it instead of just being there: the plastics recycling experts from MGG Polymers from Kematen an der Ybbs, who presented the new recycling product „filled PP“ for the first time at the fair with complete success. 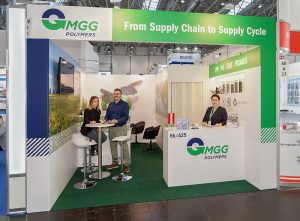 „The last time we were represented was in 2019, so we were already very excited about this year’s edition, because the „K“ only takes place every three years and thus only opened its doors again this October. I would like to particularly emphasize the high quality of discussions. The visitors to our booth showed particular interest and the conversations with other company representatives were also at a high level.

In total, we held more than 300 conversations at our booth, which made us aware once again of how much demand there is for sustainable plastics,“ summed up the managing director of MGG Polymers, Günther Höggerl. The high demand for recycled plastics now extends as far as the Middle East, North Africa and South America. The topic of greenwashing is also becoming more and more present and many companies nowadays adorn themselves with „green feathers“. The flawless organization, the many conversations, people and topics, gave the MGG team an exciting week in the capital of North Rhine-Westphalia. „This trade fair really suits MGG Polymers perfectly and this year’s hot topics also harmonized with our philosophy,“ reports the MGG Polymers managing director. 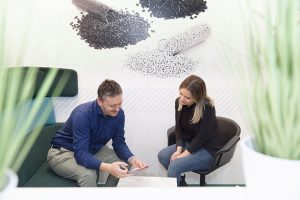 The Polymers team had over 300 personal conversations with trade show visitors and company representatives.

The core topics of the trade show were circular economy, digitalization and climate protection. According to Polymers CEO Günther Höggerl, the term „circular economy“ in particular is a big issue: „We can only emphasize it again and again: For a functioning circular economy, we in the recycling industry in particular have to pull firmly together and work on expanding the recycling depth in order to thus get the full potential out of the materials. A long and intense journey for sure, but one that will be worthwhile for all of us.“ But the topic of „digitalization“ was also on everyone’s lips at „K.“ Here, the industry still has a massive amount of catching up to do – especially as far as recycling plant manufacturers are concerned. This is because proper updates for the respective plant operating system often mean that age-old PCs have to be used, which limit and complicate the programming of the machines. „Otherwise, we are positive about the digital future and its possibilities, which can support our employees, but by no means replace them. I think we can look forward to many exciting innovations in the area of administration and research,“ says Höggerl, who particularly emphasizes climate protection as a central concern of the Müller-Guttenbrunn Group: „Photovoltaic systems allow us to produce part of our own energy supply and, in addition, we transport many goods on the track instead of in trucks. In order to visibly delay climate change, it takes the commitment of every individual!“ 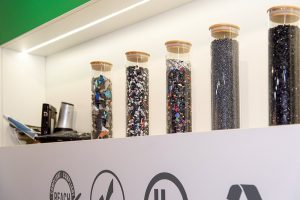 Polymers Managing Director Günther Höggerl, Sales Team Darko Huskic and José Barraca, Logistics Manager Peter Stiftinger and three other representatives of MGG Polymers were more than satisfied with the trade fair appearance and the numerous discussions according to Darko Huskic: „Partly our guests queued up to talk to us at our 20m² booth! As usual, our topics were PCR plastics from WEEE, but also our new products – filled polypropylenes (filled PP). Due to the excellent conversations as well as the good feedback, we got the impression that the CO2 footprint will play a more and more important role in the future. And our product innovation – the filled PP – caused amazement in a positive sense.“
Günther Höggerl puts the feedback from trade show visitors in concrete terms: „Yes, we caused a stir! The positive feedback was a confirmation of our intention, however, we still have to market this plastic much more openly and intensively in order to get to suitable customers.“

The future of our planet 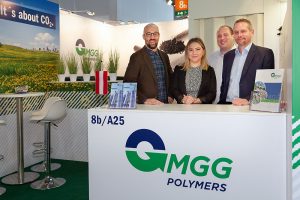 Entering the halls of the „K“, it immediately becomes clear that the future of our planet, which in the best case will be worth living, is the big meta-headline above everything. The basis for this is the circular economy, which extends from the manufacturer through the consumer to the recycler. In the polymers (EEE = electrical and electronic equipment) industry, sustainability thinking and awareness is developing rapidly, even without political intervention. Energy efficiency, short transport distances and the materials used (PCR plastics) are the most important factors. In the case of recycled plastics, much will depend on the development of the entire recycling industry. There is a need for coordinated strategies in the interests of sustainability, as well as more professional players who do not just follow familiar paths through traditional and short-sighted courses of action. Politicians will also have to continue to create favorable framework conditions, and this across borders. After all, the circular economy is a multinational issue and does not end at national borders. „If we achieve a mindset change at all levels of society, in which we replace the narrative of „low-grade waste“ with that of „valuable resources,“ then we will also achieve a comprehensive and pervasive circular economy,“ says Darko Huskic.

At the end of October 2022, more than 3,000 exhibitors from around 60 nations presented their operations, their own products and a wealth of innovations in the categories in Düsseldorf as part of the 70th edition of the „K“ trade fair: Raw & Auxiliary Materials, Plastic Goods and Processing, Machinery & Equipment and the Service for the Plastics and Rubber Industry.
These topics not only covered the entire industry, but also attracted 176,000 trade visitors to the Düsseldorf exhibition center, because nowhere else can you get such a comprehensive and international insight into the entire industry. This year’s highlights included the 70th anniversary and the many innovations from the major machine manufacturers. In this trade fair week, everything also revolved around the following three „hot topics“: circular economy, digitalization and climate protection. Topics that are on the agenda for MGG Polymers and thus this trade fair is a fixture in the recycling company’s calendar.