On tour with a lion tamer 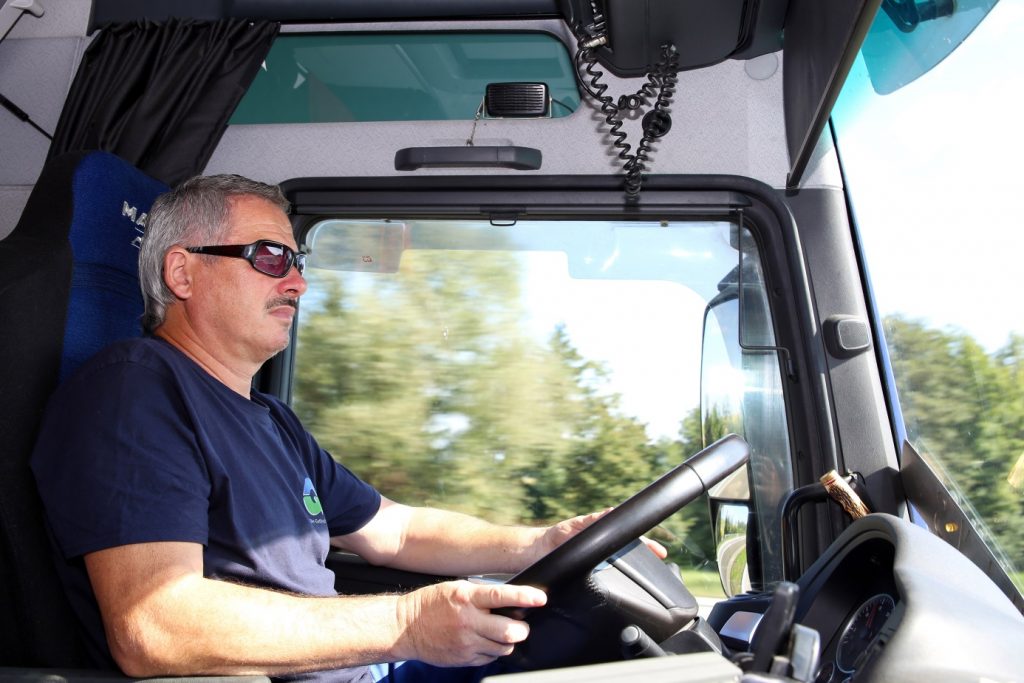 It’s a cool September morning. The sun is still hiding behind the autumn mist. Hans Schönegger is preparing himself and his blue-green sparkling truck ready for the second exit of the day. His working day had already begun at 5.15 clock. His first trip had taken him to Pressbaum, where the truck had to load dismantled transformers that had to be transported to the company premises of Metal Recycling Mü-Gu in Amstetten. Daily routine for the 54-year-old truck driver.

The second transport of the day is a trip to a scrap dealer is in St. Marien near Traun. Before the trailer with its twelve-meter-long crane can move through the exit of the company premises, the vehicle has to be weighed out. Only then the trip can start. The truck moves leisurely on the by-pass of the city of Amstetten, as suddenly, a loud blow of the trucks’ horn interrupts the regular hum of the engine – but no cause for concern!  The blow of the horn was meant for Hans Schönegger’s wife, as the truck and trailer just passes by her workplace. „With this salute to her, she knows that I am on the road again.“ laughs Hans Schönegger. 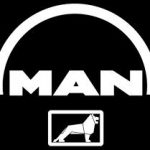 His wife is also present in the large truck cabin: in front at the windshield are two name signs; one with the name of his wife and a heart, and another, with HANS emblazoned in large capital letters.  In addition there are fluffy carpets on the ground as well as different country banners and a blue shining lion on the window of his working place behind the steering wheel. The lion is important to Hans Schönegger – his “scepter” as he names it – because the predator animal is also the logo of MAN, the manufacturer of his utility vehicle. There are, of course, other splendid trucks, but for twenty-four years, twenty of them at Miiller-Guttenbrunn, Hans Schönegger has been taming such lions.  Hans Schönegger is driving some 80,000 kilometers a year with his “lion”. His vehicle, that on the outside shows some other lions, is a special truck in the fleet of Müller-Guttenbrunn in Amstetten: it is the only truck with crane. All other cranes on the fleet are built on the trailers.

On the opposite track

Meanwhile, the 480 HP vehicle is traveling along the motorway towards Linz. On the opposite track, it suddenly flashes blue and green…. a colleague of Hans Schönegger is on his way back from Salzburg. They greet each other as they pass by. In earlier days, they often talked with colleagues using the Citizen Band radio, but these times are over, says Schönegger. This is now fully taken over by the mobile telephone network, which is really easy.

There have been a lot of other changes and in fact there is always something that is changing. Just now the digital transmission of transport orders directly into the trucks’ cabin is being tested – such a very different method of information transfer compared to the times when Hans Schönegger first steered a truck. And that is already a long time ago. The skilled mechanic was already driving his first tours through Austria at the tender age of 19 years. „At that time I was often asked: What are you doing here, young man? And then I had to explain that I am the driver of the truck.“ says the truck driver, looking back at these days in great mood.

This period was followed by a period of long-haul trucking – for example to Hamburg. It was good for the bank account, but in the long run it turned out not to be good for the quality of life. All the more Hans Schönegger appreciates the work at Müller-Guttenbrunn. Of course, there are also strenuous days, but this cannot be compared to the driving experience of these former times. The current job has pleasant working hours, regular breaks and no weekend trips – just beautiful, Schönegger says, while he is driving the 24-ton trailer truck with ease through narrow streets of St. Marien.

A surprise at the scrap yard 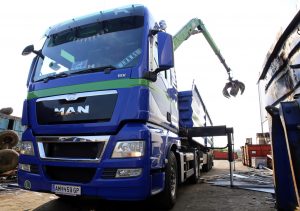 Arriving at the scrap trader, there is a surprise. It turns out that it is not the usual metal scrap that needs to be loaded, but instead aluminum window frames and light mixed metal.

Skillfully Schönegger reverses his strong Lion to the intended loading place. The supports of the truck are extended, the gloves and sunglasses put on, as in the meantime the sun had decided to break through the mist. With a professional swing, Schönegger climbs onto the crane and begins to load the large window frames. The trucks cabin trembles and the lion on the window of the cabin shakes, while the crane performs its work – only one remains really calm….Hans Schönegger.

After this first part of the loading of the window frames was completed, it is necessary to steer the tractor into a hall in order to load the mixed metal. Schönegger conducts the crane, which claws drill in the colorful pile of mixed materials lifting everything from chain-wire fences through to parasols and gardening tools and even a deck chair. As soon as everything is loaded, Hans Schönegger climbs onto the trailer to take a look at the load. „It is very important that the loaded materials are properly secured. No materials may be lost during the ride at any circumstances” says the truck driver.

No hard work this time and remembering a turbo-charger damage.

Just as weighing in before the loading process, the truck is again weighed out after the loading is completed. Only five tons of cargo is loaded this time. This really is a very light cargo compared to most other runs. Often there are twelve end-of-life vehicles on the trailer. Loading cars is much more challenging, betrays Schönegger. The end-of-life vehicles must carefully be stacked on top of each other in such a way, that none of the vehicles leak any of their vehicle liquids. 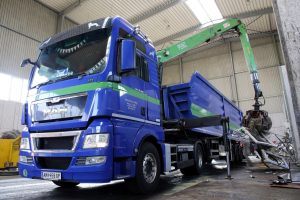 Fortunately the low loading weight has a positive impact on the return journey. The truck is easily taking uphill stretches along the motorway. At St. Valentin, Hans Schönegger remembers that a few years ago his vehicle had a defective turbo-charger. „The truck was smoking terribly – everything was completely black. Of course this can only happen on a Friday afternoon with the weekend in sight“, fortunately he can smile about it today. This time there is no nasty surprise. Amstetten is once again in sight. And on the bypass road the horn sounds again – the reason why is now clarified.