Practical experience instead of grey theory 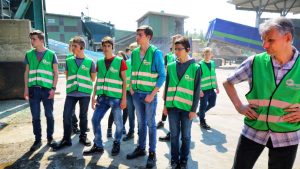 It is well known that a little practice often makes things much more understandable than a lot of grey theory. That’s why 13 students of the HTL Waidhofen/Ybbs got a close look at how the Müller-Guttenbrunn Group (MGG) extracts new raw materials from waste. At the three MGG sites in Mostviertel, Metrec, Metran and Polymers, the HTL students learned exciting details – and of course the young guests also had interesting questions in their luggage.

In the meantime, visiting HTL Waidhofen at MGG has become a tradition. “We are delighted that we can contribute to bringing young people closer to topics such as recycling and sustainability. With the help of our three plants, they learn how to keep resources in the cycle – and of course what function each individual plant has in the Müller-Guttenbrunn Group,” explains MGG Managing Director Christian Müller-Guttenbrunn.

The 13 HTL students at MGG Metrec in Amstetten, where the recycling process for many materials in the Müller-Guttenbrunn Group also begins, got off to a good start. The excursion group learned that at MGG Metrec end-of-life vehicles are accepted, cleaned of pollutants and shredded with a shredder. The same applies to household and electrical scrap. The resulting iron scrap is delivered by rail for further processing in the furnaces of the steelworks. 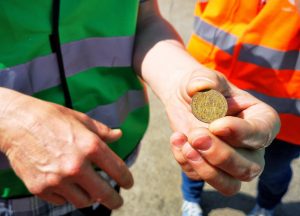 The guests also learned what happens to the non-ferrous fractions in various sizes that come out of the car or electric shredder afterwards: These are then transported to MGG Metran for further processing. The MGG plant in Kematen was the next stop for the students, who were fascinated above all by the various separation systems and the machines used. They learned which physical laws are applied to enable effective separation mechanisms. With the different fractions produced by the individual separation steps, there were also one or two “sensational finds” – such as “no cash” coins – with which a wide variety of automatic machines and washing systems can be filled.

In recent years, more and more plastic fractions have been recovered at MGG Metran. These are transferred to MGG Polymers for further processing. The neighbouring plant was also the third and last stop for the students from Waidhofen on their excursion. Here the young people learned that the plant specializes in the recycling of plastics from electrical and electronic waste. Once impurities such as fluff, foam, rubber, wood, etc. have been separated, the target plastics ABS, PS, PC-ABS and PP are separated according to type and these are subsequently extruded. The plastics obtained are finally packaged as granulate in various variants and sold to customers, who can then produce new products from them. 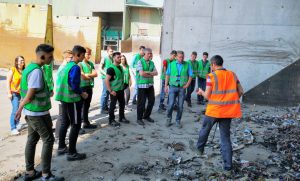 With this short round trip, the pupils were able to follow the recycling cycle of waste well and get to know the special recycling chain within the Müller-Guttenbrunn Group: from the initial great force required for shredding in the shredder plants to the sophisticated separation methods for individual metals and plastics to the production of pure, recovered plastic. The students were also told how much energy and raw materials can be saved by recycling. For example, CO2 emissions can be reduced by 4.5 tonnes by recycling one tonne of engineering plastics. This grey number from the theory has certainly gained some colour and shape for the 13 HTL students after the day in the Müller-Guttenbrunn Group.