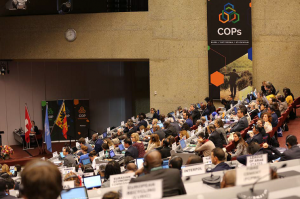 Important aspects of environmental protection were addressed at the United Nations BRS-COP 2019 in the spring. Chris Slijkhuis, an employee of the Müller-Guttenbrunn Group, also contributed with his expertise.

In spring 2019 it was COP time again. In this case, COP does not stand for the American acronym for a policeman, but for the “Conference of the Parties”. Specifically, these are the Parties to the UN Conventions of Basel, Rotterdam and Stockholm (BRS), which meet every two years for a conference. Often unnoticed by the public, these three international conventions regulate the prevention and combating of illegal traffic and trade in hazardous chemicals and waste.

The Basel Convention, for example, lays down rules on the transboundary transport and disposal of hazardous wastes. The Parties to the Rotterdam Convention look at hazardous chemicals and pesticides. The Conference on the Stockholm Convention monitors persistent organic pollutants.

Among the approximately 1,400 participants from 180 countries, Chris Slijkhuis, an employee of the Müller-Guttenbrunn Group, was present at this year’s COP in Geneva. Slijkhuis took part in the conference as a representative of the European Association of Electronics Recycling Companies (EERA).

Among the many aspects discussed, his main focus as Observer in the Basel Convention was on setting threshold values for certain brominated flame retardants. One of these flame retardants – more specifically Deca-BDE – is often found in plastic parts in electronic waste (WEEE). At COP 2017, this substance was declared a POP (persistent organic pollutant) by the Stockholm Convention for which internationally valid limit values (Low POP Content) were to be found in the Basel Convention in Geneva this year. While an upper limit of 1,000 ppm (parts per million) has been set for the PBDE substance group, which also includes Deca-BDE, in the EU since April of this year, no global agreement could be reached on this. 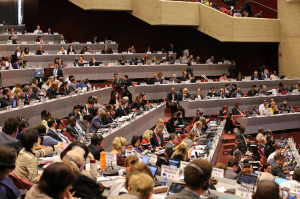 “Here in Geneva, simply too different points of view met,” Chris Slijkhuis says in retrospect. “As recyclers, we understand that these substances are persistent and therefore upper limits make sense. However, they must not be set so low that recycling of plastics from electronic scrap is impossible. Therefore, the EU upper limit of 1,000 ppm was considered sensible after a lengthy discussion phase.” However, environmental NGOs had demanded limit values of 50 ppm – a value that can only be verified with incredible effort and would mean that a huge amount of plastics would have to be incinerated instead of being recycled. For Slijkhuis it is incomprehensible that some country representatives joined this demand and thus prevented the setting of a limit value: “Considering how much energy, raw materials and CO2 emissions are saved by recycling, nobody should be interested in setting such low limit values. It is more important for the environment to find an intelligent balance between eliminating these pollutants and still being able to recycle plastics”. Because no agreement could be reached and every compromise proposal was rejected, this issue will be addressed again at the next COP in 2021. In the EU, the 1,000 ppm limit will remain in force at least until then.

Fight against plastics in the oceans

A second point of particular relevance for recycling companies – such as the Müller-Guttenbrunn Group – which was discussed and decided in Geneva, concerns the cross-border transport of plastics.

In the COP on the Basel Convention, the Norwegian delegation made an attempt to put a stop to the pollution of the world’s oceans by plastic waste in the future. To this end, the cross-border transport of plastic waste should also be subject to stricter controls. In Switzerland the Basel Convention agreed on the following points, which will become valid from the beginning of 2021:

The third point, however, still contains some question marks: There are no valid limit values for contamination – type (which substances) and intensity of contamination have not been determined.

If plastic waste is declared as hazardous waste for certain contaminations with this regulation, a new regulation for plastic recycling plants would also be necessary, because plastic plants are generally not approved for the acceptance of hazardous waste. “This is particularly important for our MGG Polymers plant, where we are currently processing plastics, which would then possibly receive such a code for hazardous waste,” explains Chris Slijkhuis, who sees a need for further discussion here.

“This also raises the question of whether these regulations apply to deliveries within the EU or only to exports to non-EU countries. Answers to these open questions must in any case be found well before January 2021. That is when these decisions need to be implemented.   The Müller-Guttenbrunn Group is eager to contribute with its expertise and advocate sensible solutions in this important matter. 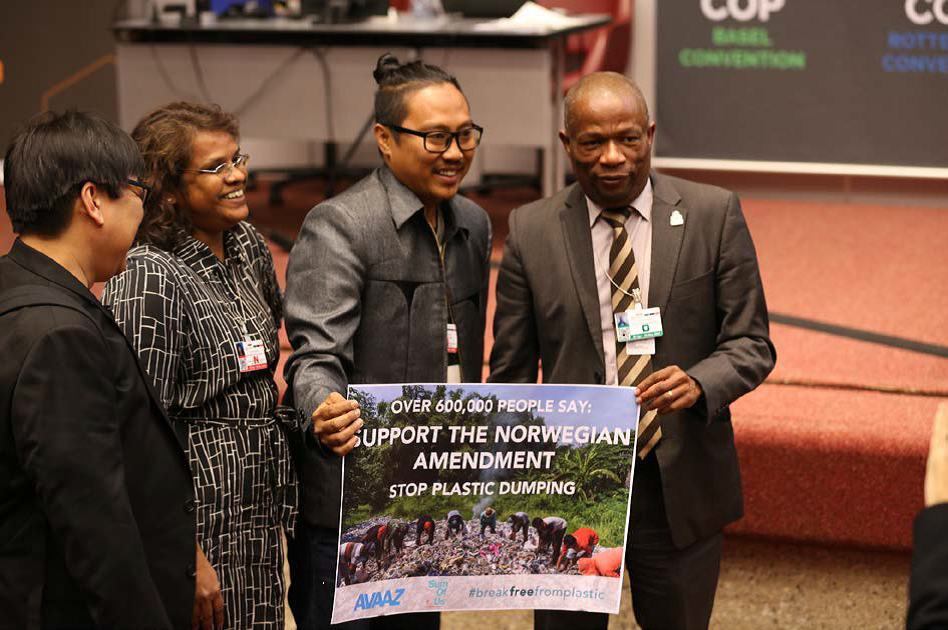 “The views expressed in this publication are those of the authors and do not necessarily reflect the views of the Secretariats of the Basel, Rotterdam and Stockholm (BRS) Conventions, the United Nations Environment Programme (UNEP), and of the United Nations (UN). The Secretariats of the BRS Conventions, UNEP or the UN do not accept responsibility for the accuracy or completeness of the contents and shall not be liable for any loss or damage that may be occasioned, directly or indirectly, through the use of, or reliance on, the contents of this publication. Mention of the names of companies and commercial products does not imply their endorsement by the UN, UNEP nor by the Secretariats of the BRS Conventions”.