Renovation of an important transport artery

Within one month, the track system at MGG Metrec in Amstetten was completely renewed. To ensure that the facilities at the company site did not have to stand still for long, meticulous planning was carried out in advance. The planning also paid off in the end.

Everything was meticulously planned. Nothing was left to chance. After all, one of the vital transportation arteries for MGG Metrec was at stake – specifically, the rehabilitation of the aging rail tracks. Every year, around 4,000 wagons travel in and out of the company premises in Amstetten. In the process, 170,000 tons of material are moved. Therefore, this important artery could not be disconnected for too long due to the refurbishment…

Although the track system at MGG Metrec has always been well maintained, the gnawing ravages of time couldn’t be stopped completely. Especially not because the demands on the tracks have increased enormously, as MGG Metrec Managing Director Michael Grimm reports: „When I started at Müller-Guttenbrunn 35 years ago, 25 tons of material were loaded into the wagons. Today it is 65 tons!“ 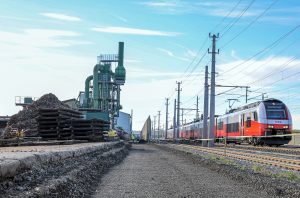 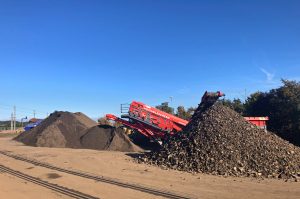 So on September 20, after meticulous planning, the Swietelsky construction crew started work. The workers immediately set about demolishing the west approach, which could not be used at all in the last two years. While the wooden sleepers were replaced by much more robust sleepers made of concrete, the excavated material (track ballast, earth material, etc.) was recycled using screening equipment. In the end, around 1,000 tons of the 1,800 tons of material removed could be reused.

Due to the structural conditions, the workers had to lay the first 300 linear meters of track manually. Things got really exciting from October 14 onwards: important equipment at MGG Metrec (shears, shredder) was shut down so that the eastbound track could be completely renovated. To ensure that the plants were shut down for as short a time as possible, the Swietelsky team was increased from 6 to 13 men in order to be able to work around the clock in two shifts during the following days. The plan worked: The old rails and sleepers were removed, followed by the ballast and earth material. After the track trench was filled again, 17-ton track panels, each 30 meters long, were laid with a powerful railway crane. In addition, further track ballast was brought in, which was compacted with a tamping machine. 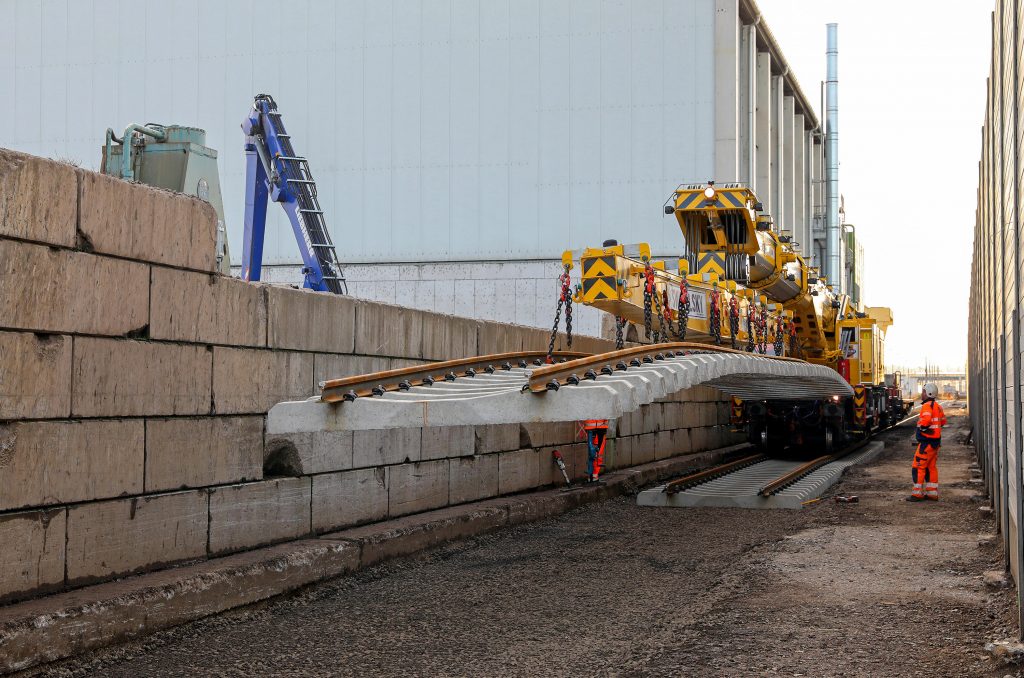 The good work done in advance paid off: As planned, the renovation was completed on October 20 and the facilities at MGG Metrec were able to resume their usual operations. „It really went optimally. The fact that the cooperation with MGG Metrec was excellent also contributed to this. It really was a harmonious working atmosphere, because when we needed something quickly – a loader, for example – we got it immediately. That is not always a matter of course,“ Swietelsky foreman Alois Löbl confirmed the ideal process.

Setting the course for the future

For MGG Metrec, the investment of almost 600,000 euros is a real stepping stone for the future. „At last, we can once again enter and leave from the west. Of course, this means an enormous increase in efficiency. The change from wooden to concrete sleepers also means that the system will last longer and we can take advantage of the higher axle loads of the new wagons,“ explains MGG Managing Director Michael Grimm. This means that the important transport artery can be used even better in the future.

Data on the renovation: