In the beauty of a flat and plain land area near the village of Frumuseni, located only a few kilometers from the city of Arad in Western Romania, a completely new headquarters and branch of S.C. REMAT M.G. S.A. was opened early October 2012.

The new site is specialized on Electronic Wastes as well as non-ferrous metals and cable recycling and the investment in equipment is based on truly European Standards. 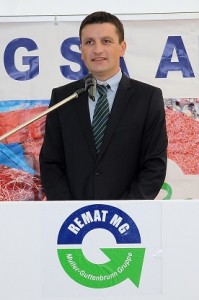 “With the support of the group and as a result of physical, financial and emotional efforts, we managed to build this facilty and to install all equipment necessary for effective recycling,” said Marius Mairovitz, general manager REMAT MG. In 2000, the Müller-Guttenbrunn Group made the first step in Romania by setting up a recycling company in Timisoara. The Müller-Guttenbrunn Group has other subsidiaries in Austria, Czech Republic, Hungary Romania, Schweiz and Bulgaria. In 2005, the group acquired the majority of shares of Remat Arad, and in 2011 it was decided to merge Remat MG with Müller-Guttenbrunn Recycling.  Then, the construction work could be planned next to Frumuseni, a village located seven kilometers from Zabrani, hometown of the famous writer Adam Müller-Guttenbrunn – ancestor of the Müller-Guttenbrunn family. “The newly developed infrastructure forms a proper basis for the metal recycling activities, that are all taking place in line with the latest environmental standards. Modern storage and warehousing as well as the latest separation, sorting and processing facilities offer optimal conditions for efficient and modern business processes.” said Marius Mairovitz. The latest technology for recycling electronic waste, combined with manual sorting stations result in a  processing capacity of some 10 tons per hour and another processing line for recycling copper and aluminium cables has a capacity of one ton per hour. “The construction of this new base mainly aims at the development and growth of our company’s activities by increasing waste processing capacity, finding the optimum between technological and manual separation and sorting techniques in order, of course,  to increase the quality of the finished product, the secondary raw materials. Further developing an excellent customer service relationship with our business partners, we want to expand our collaboration with existing business partners as well as increasing our business with new business partners for mutual benefit. We expect that our new recycling facility, will help to develop the area, not only by creating jobs, but also by attracting other new business, as the area is ideally located to become a future industrial park area. The opening of this new facility is like a dream becoming reality, not only for me but also for the Group.” said Marius Mairovitz.
The opening ceremony was of course also attended by Christian Müller-Guttenbrunn, Group CEO. He is a great-great-grandson of the writer Adam Müller-Guttenbrunn, whose grandfather founded the Müller-Guttenbrunn company 58 years ago. “The decision to relocate outside the city is a courageous one and I congratulate you on the decision to invest in Romania and for the money that you have spent here.” said Nicholas Băcanu, President of the Chamber of Commerce and Industry of Arad. “The investment is a major one, with a figure that contains six zeros.  We hope that with this investment we will develop both of our recycling activities and with it to also create a potential for the development of an industrial park in this area. Last but not least, we hope to bring recycling to another level in modern mining, effectively to extract all the natural resources that were once used in durable products, and allowing them to be reintroduced into new products. It is our primary goal to further develop our business in this direction, because we are really motivated to do something in this field, which in my view is not currently fully exploited. “said Marius Mairovitz. 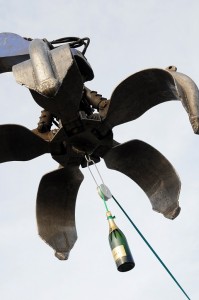 Experiences from the Corona period

The man for special cases

"I can give it a try!"
» Müller-Guttenbrunn Newsletter
ÖFFNUNGSZEITEN