Mag. Christian Müller-Guttenbrunn is proud that the Group now has a holistic management system since January 2015: „Quality Standards and their ongoing review take a lot of time and work, but as we are a responsible and environmentally conscious recycling company, the latest standards form an essential basis for our company group strategy. I am pleased to see that we now have a group certified integrated management system. This once again confirms our pioneering role in the industry! “

Back in January 2014, a project team, headed by Paul Lohnecker launched a project within Metall Recycling Mü-Gu to integrate the organization and processes against the certification standards ISO 9001, ISO 14001 and CENELEC into a unified management system. The team worked with the external specialized consulting company Lucon as accompanying partner.  Their experience in the industry and with our JV company MBA Polymers was found to be a sufficiently sound basis for this cooperation. Together they completed the necessary steps towards an integrated management system – in short IMS.

Step 1: Analysis – at the end of March an analysis of the business processes and assessment of the environmental effects was made. Not surprisingly it turned out that the greatest causes for environmental impacts were the car-shredder (mainly noise, energy and air) and the truck fleet (air and energy – fuel consumption).

Step 2: The objectives – Measurable objectives were defined to counteract these identified environmental impacts. To just give one example related to the car shredder.  In order to reduce the number of incidents, an improvement of the de-pollution of the car wrecks could be considered. This measure would have a reducing effect of the number of deflagrations in the car shredder.  Another area that was considered was the issue of noise impact of the shredder.  As can be read in the article “Whisper Shredder” an enclosure of the shredder has already been implemented as a consequence. Similar objectives have been defined for Metran.

Other environmental aspects have been identified in the Truck Fleet. The largest areas of impact in this context relate to the emissions, the energy and fuel consumption.  The key objective is therefore to reduce fuel consumption.  In order to achieve this goal it is planned to further improve the route planning of the fleet. In addition, for the purchase of new trucks to replace the old ones, only new Euro 6 trucks will be considered.

Step 3: The Manual – As a next step, the team prepared the management manual, a handbook that serves as the company’s „road map“.  The management manual summarizes and documents important elements such as process definitions, the groups’ quality and environmental policies, document management and many other points in relation to the standards ISO 9001 and 14001.  The manual forms the center of the Integrated Management System and it combines over 20 different documents into a single document.  Just before the summer vacation, at the end of June 2014, the backbone of the new management system was completed.

Step 4: The Legal Compliance – The largest chunk was the project team has without any discussion been the chapter – „Legal Compliance“.  In this step there was the need to examine not only the large amount of permits against the legal structures.  The complexity was given by the fact that the first permits date 1976 and that the many subsequent permits and decisions were created and submitted by three different authorities (BH Amstetten, Municipality of Amstetten and Provincial Government of Niederösterreich).  Overall the analyses involved the review of some 70 permits with approximately 500 different requirements against about 60 laws and regulations relating to the business of the Müller-Guttenbrunn Group.

On the 21st of October 2014, an internal was performed with the following agenda items:

On the basis of the internal audit, the further schedule for audit and certification was determined. Some issues needed to be enhanced before the final external audit. 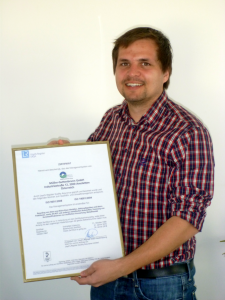 Step 6: The external audit was carried out by Lloyds.

Stage 1. Just before Christmas, the first part (Stage 1 audit) of the external audit took place by the company Lloyds Register Quality Assurance. It was confirmed that it would make sense that a Group audit of the Müller-Guttenbrunn Group would take place.

Stage 2.  The final audit took place from 26 to 28 of January. Three auditors of Lloyds examined the various aspects of the Müller-Guttenbrunn Group companies involved.  At the closing session of the audit in the late afternoon of 28 January, it was announced that the group audit is completed successfully and the certificates are available.