The end of a railway wagon 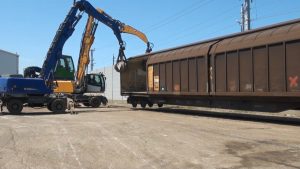 Even large machines and equipment are not made for eternity. This also applies to railway wagons, which are frequently scrapped at MGG Metrec in Amstetten.

They have been on the rails for many years and countless kilometers – right across Austria and even beyond its borders. But at some point, time runs out even for the most solid railway wagon and it has to be replaced. But what happens to the old wagons weighing several tons? They are recycled, of course – at MGG Metrec in Amstetten, for example.

Thanks to the rail siding, the wagon can be easily and directly delivered to the factory premises. First of all, the delivered railway wagon is closely inspected. Which parts are still in tact and can possibly be reused immediately? Which parts are only scrap and should be melted down again? For example, expensive components such as the wheels, if they are not yet worn, can be preserved and reused. Once these questions have been clarified, the unusual spectacle begins: two excavators lift the old wagon off the rails before the rolling scrap metal gets stuck to the collar – or rather to the walls. 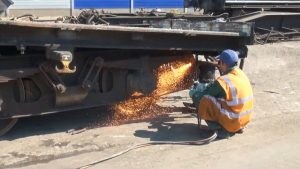 With the orange peel grab on the excavator, the side walls are removed from the wagon before individual elements are cut from the steel skeleton with a welding torch. In the meantime, the excavator operator changes his machine: instead of the grab, a mobile hydraulic shear is now located at the end of the boom. This allows what is left of the wagon to be cut up with ease. 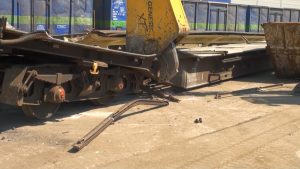 The metal shears cuts through the reinforced profiles like a warm knife through butter. “Nevertheless, you always have to approach things with brains, because the material is often under considerable tension. You should know where to cut and where not to cut,” explains Hannes Grissenberger, site manager at MGG Metrec in Amstetten.

Of course, an excavator driver cannot do all the work with his equipment alone. He always needs help on the ground, which is always available at the right time thanks to the well-coordinated MGG Metrec team. Together, the 25-tonne wagon can be dismantled within a few hours. If the parts are small enough, they are loaded again – onto a wagon, of course. Then the railway wagon, which has now been dismantled into many individual parts, begins its final journey on the rails – to the next smelting plant, where it is melted down again into raw material and then processed into a new product.

Although such dismantling work on large equipment is not part of the daily routine at MGG Metrec in Amstetten, the company is well equipped for it. Not only wagons, but also entire locomotives, trams, trucks or large trailers can be dismantled into small parts on the factory premises. The crew at MGG Metrec is also capable of dismantling large industrial plants (e.g. tanks) and preparing them for recycling. Challenges like these make life really exciting for the recycling professionals at the Müller-Guttenbrunn Group.

Go to see the video