When recycling gets dicey 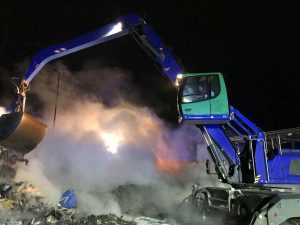 The fire at MGG Metran at the end of February was probably caused by an incorrectly disposed  lithium-ion battery.

A fire at the MGG Metran plant site once again highlights the great danger posed by lithium-ion batteries in collected recycling material. There are plenty of ideas for improving the current unsatisfactory situation from the point of view of recycling companies.

Fires in recycling plants are unfortunately not uncommon. Often the cause is a single, incorrectly disposed, damaged lithium-ion battery. Just a few weeks ago, plastic recycling material stored at the MGG Metran site was also on fire in the middle of the night. Thanks to the rapid deployment of 13 fire departments, the fire was quickly brought under control and extinguished, so that no one was injured. Suspected cause of fire: an incorrectly disposed lithium-ion battery.

This form of battery, which is also installed in smartphones, has a high energy density. Slight damage, however, can quickly lead to spontaneous combustion. Rechargeable batteries and batteries are therefore usually already removed during the collection of old appliances at waste yards. For this reason, it is first and foremost important to dispose electrical and electronic equipment – and this increasingly includes rather atypical products such as toys – properly.

Usually, rechargeable batteries and batteries are disposed separately from the device. However, rechargeable batteries are increasingly being installed in devices in such a way that they can only be removed by specialists with special tools. Therefore, despite all precautionary measures, it happens again and again that a rechargeable battery is overlooked and becomes a potential cause of fire in the recycling material. To counter this danger, the Müller-Guttenbrunn Group (MGG), which processes thousands of tons of electrical and electronic scrap each year, has drastically increased safety measures in recent years. 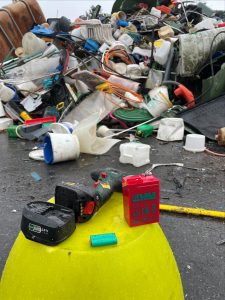 Unfortunately, the fire at MGG Metran proves once again that there never is a 100% safety. The Association of European Electronics Recyclers (EERA), in which the Müller-Guttenbrunn Group is involved, is also aware of this. The association therefore invited its members to exchange experiences on how to minimize the risk of fire from lithium-ion batteries in recycling plants. In the resulting report, there are numerous preventive measures in organization, technology and infrastructure that recycling companies can take. The key conclusion, however, is that the best way to prevent fires is to eliminate the risk posed by spent batteries as early as possible in the collection and recycling chain. In truth, this starts with the design of a new electrical/electronic product!

EERA therefore calls on the legislators, authorities and all other involved bodies and organizations to do their part to increase safety in the collection and treatment electrical and electronic scrap (WEEE). Specifically, they are calling for:

A fire truck on the roof on a building